UNLISTED: Twice in a Lifetime

The durational performance piece “Everywhere is a Home,” created by Cory Tamler (playwright/director, USA) and Tanja Sljivar (playwright/dramaturg, Bosnia & Herzegovina) under performance curator Christina Kruise (USA). It was performed by actresses Milica Stefanovic and Tijana Kondic (both from Serbia) as part of Unlisted: Twice in a Lifetime. Unlisted: Twice in a Lifetime was an unconventional performance series that took place in Belgrade, Serbia from September 21-22 as a satellite event to the 2012 Bitef Festival. Its thesis is simple: A small change in awareness or perception can create a ripple effect, nudging the aesthetic and emotional life of a whole city in a new direction. According to architect Juhani Pallasmaa, “Buildings are extensions of our bodies and minds.” Lewis Mumford, Gaston Bachelard, and Jonathan Raban argue that it’s space that generates society’s mental and emotional state. Chicken vs. egg argument aside, in an urban environment, there is some level on which space creates mind/body, and vice versa. We want to ask: How does a newcomer see a space differently than someone who has seen it every day for the last 20 years? Can awareness of a space affect awareness of its potential? Does the way one person interacts with a space change how others perceive that space? 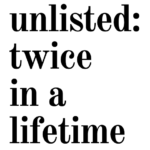